All You Ever Wanted to Know About Insurance

Phones a huge distraction, and it’s killing us 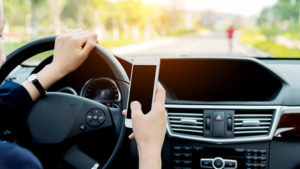 Phones are a dangerous distraction, and that’s just part of the story. GPS, radio knobs — anything that lures your eyes off the road is a threat.

The advent of the smart phone has brought with it a deluge of texting and other distractive behavior while driving a vehicle. This is no longer confined to the young and restless – we see people of all ages, genders and backgrounds using phones when they should be driving.

These numbers are most likely higher as drivers involved in accidents may be reluctant to admit to driving distracted.

While all of the following are common distractions behind the wheel, text messaging is by far the most alarming. It requires significant visual, manual and cognitive focus from the driver – three key things a driver needs to drive safely.

As important as it is for us to make an effort not to drive distracted, we also need to be aware that others around us – drivers, bicyclists and pedestrians – may be distracted. While you may be able to quickly discern when pedestrians or cyclists are focused on their phones, some behaviors that may tip you off to a distracted driver include:

Finally, distracted driving issues can be compounded by fatigue. More and more our daily demands seem to be impinging on our ability to get required sleep. Sleepiness, without fail, results in cognitive and behavioral changes that can contribute to vehicle crashes, poor work performance, accidents and other long-term physical and mental health consequences. Precise counts of crashes caused by drowsy driving are not yet possible.

Be aware of your own distractions, those who are distracted around you and the impact of driving while fatigued.